The Meatlumps are a notorious gang that plagues Corellia. But a chance meeting in Coronet might give you an opportunity to weaken their criminal grip on the planet....

You'll find a No-Trade View Screen with a Corellia Times logo on Merkie's corpse. Radial and Inspect the viewscreen to start the quest which leads to the Meatlumps Theme Park. 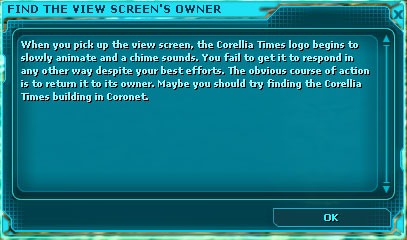 Find the Owner of the ViewscreenEdit

Activating the viewscreen gives you a few flickers but nothing else. Perhaps you should return it to the Corellia Times (-175 -4445) and see if anyone claims it. Go there and talk to Finn Shallo, the editor. He says that the screen belongs to Vani Korr, who claims to have been attacked by Meatlumps. She is inside the Medical Center (-105 -4436) on the first floor.

Vani tells you that she has been investigating the Meatlumps and that she is sure the attack on her was no coincidence. She cannot continue the research, of course, but thinks that you can. She asks you to help her locate the names of the three Meatlump brothers who lead the gang. Agree to help her, and the quest updates.

Vani says that the average Meatlump is such an idiot that he carries a datapad with his name and other important information on it so that he won't forget. She asks you to get her 9 of these datapads, she is sure to find out some useful information as to the identity of the leaders this way.

To complete this, find and kill Meatlumps of any kind until you locate 9 datapads. The easiest way to do this since the NGE is to go to the static Meatlump spawn at /wp -173 -5005 right outside of Coronet. Once you have found 9 datapads, return to Vani.

Vani is thrilled with the datapads... but they seem to be encrypted, to her surprise. She tells you to return to the Meatlump camp southeast of the city and access the radio in the tent there. That should summon a Meatlump Lieutenant, who will have the code. She says you can try and trick him into giving it to you, but be prepared to fight just in case.

Go to the camp at /wp -79 -4982 and use the radio there. A Meatump Lieutenant (CL31) appears at the tent. Use the radial menu to "Converse" with him, and he will ask you why you activated the signal? If you tell him you need the password, he will ask you for the code. You get a long string of possible phrases; the correct choice is "Sunlight Shining in the Shadows" but if you get it right, he will simply tell you the password. If you get it wrong, it is not the end - simply kill the Lieutenant and your quest will update with the password you found on his body. Return to Vani.

Once you return the password to her, she is able to crack the code and will be able to write her article. She thanks you and gives you an advance copy of the article (an item in your inventory which you can "Read" and learn more about the Meatlumps).

Retrieved from "https://swg.fandom.com/wiki/The_Meatlumps_Quest?oldid=148552"
Community content is available under CC-BY-SA unless otherwise noted.