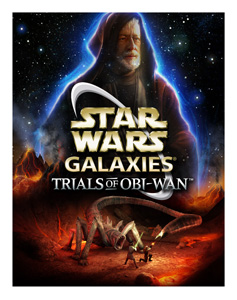 The Trials of Obi-Wan (ToOW) introduces the dangerous planet of Mustafar to Star Wars Galaxies. Final resting place of the Separatist Leadership and the scene of the fateful duel between Anakin Skywalker and Obi-Wan Kenobi, Mustafar will challenge players to a wide range of new missions and tasks, including working for the famed Jedi Master himself.

No longer available. The Trials of Obi-Wan expansion and reward items are part of the new Complete Online Adventures Premium Plus package, on sale from Direct2Drive, STEAM, the Station Store, and LucasArts.

Some players were able to hack the .TRE files on test center, some of which are for the upcoming expansion. Rumors of what will be added in the expansion included expanding the Lightsaber mastery for the different forms of lightsaber fighting. While not confirming specific details, Blixtev did say, "Those Tre file rippers really take fun out of the fun of discovery if you know whats coming."

Letter to the Community[]

In a letter to the community, Grant “Rogue_5” McDaniel, SOE Producer, revealed more information on the upcoming expansion.

Following is a copy of the press-release announcing the Trials of Obi-Wan expansion for Star Wars Galaxies. This page will be updated with information as it becomes available.

August 19, 2005 - LucasArts and Sony Online Entertainment Inc. ( SOE ) today unveiled Star Wars Galaxies: Trials of Obi-Wan to the cheers of Star Wars Galaxies ™ enthusiasts gathered for a fan breakfast at the 2005 Games Convention in Leipzig, Germany. This third expansion to the popular immersive online game is scheduled for release on November 1, alongside the Star Wars : Episode III Revenge of the Sith theatrical DVD and Star Wars Battlefront ™ II video game. The companies also revealed that more than 1 million units of the Star Wars Galaxies franchise have now been sold, a testament to its ongoing popularity.

Like Obi-Wan Kenobi after his death, Star Wars Galaxies has become "more powerful than you can possibly imagine." Appropriately, Trials of Obi-Wan allows players to better understand the meaning of these final words spoken by Luke Skywalker's mentor, as they embark upon missions delivered directly from the spirit of the revered Jedi Master himself. From the very shores of molten lava where he defeated Anakin Skywalker, Obi-Wan guides players on quests that span the planet Mustafar - some of which might even convert devotees of the dark side over to a more virtuous path. This expansion features many new high-level quest rewards, including the ability to find a fiery red crystal found only on the volcanic planet that creates a lava-like lightsaber for the lucky owner. Players who fulfill all of Obi-Wan's directives will also receive a rich reward.

Mustafar colonists present many exciting trials of their own, too, as Trials of Obi-Wan includes more than 50 new quests for the galaxy's bravest adventurers, from rescue missions to the exploration of a crashed Republic cruiser. Many quests also revolve around a prominent figure from Star Wars ® : Knights of the Old Republic ® who returns 4,000 years after his prime with one simple mission in mind: Eliminate all meatbags.

"With Trials of Obi-Wan being an expansion set for release via digital download the same day as the Episode III DVD, we can't think of a better planet to add to Star Wars Galaxies than Mustafar," said Julio Torres, Producer at LucasArts. "Meanwhile, including the spirit of Obi-Wan nicely bridges the prequel era and the more classic-oriented time period depicted in the game. We're really excited about continuing mythology established by other LucasArts games, as well."

The release of Trials of Obi-Wan will provide a significant boost to a franchise that has already sold more than 1 million units worldwide. In recent months, interest and subscriptions in Star Wars Galaxies has grown, fueled by recent game additions, as well as the connection of the game content to Star Wars : Episode III Revenge of the Sith.

"A lot of positive changes have taken effect since Star Wars Galaxies first launched," said Nancy MacIntyre, LucasArts' Senior Director for the game. "We've picked up quite a few new fans and reintroduced many others to the game, especially since the Rage of the Wookiees expansion in May. Trials of Obi-Wan will only further this positive momentum."

The Pre-Order was made available as of October 4, 2005 through the Sony Store, and went live on November 1, 2005 as a digital download.

Players who purchased the TOOW stand-alone digital download could claim a Lava Flea mount which was impervious to damage from the deadly lava flows around Mustafar. Players could also obtain the Mustafarian Underground Bunker, a 3 level personal structure that could also serve as a PA hall. The structure takes its design aspects and tone from the installations on Mustafar, and its layout offers great flexibility for hosting guests and interior design. The structure is the equivalent of a large house, and takes up 5 structure lots: it can not be traded while in deed form, and can not be transferred via the structure transfer process.

Accounts that pre-ordered TOOW were able to claim the Transport Skiff, an in-game vehicle modeled on the small hovercraft Jabba had his prisoners on over the Pit of Cartoom and the infamous Sarlacc. Those accounts were also allowed to access the expansion a week before the actual release date, on October 25, 2005.