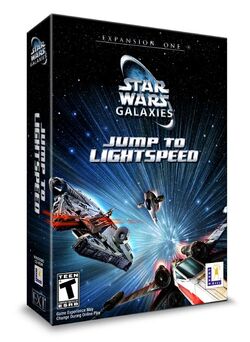 Set in the Star Wars timeframe between Episode IV and Episode V, this first expansion to Star Wars Galaxies opens 12 vast and distinct space sectors, spanning from the Core Worlds to the Outer Rim, for players to explore while engaging their opponents in intense real-time combat or uniting with friends in battle or exploration. Players can embark on more than 100 new missions, venturing through asteroid fields, nebulae and space junkyards while honing skills in nine space-specific pilot squadrons. The game also features two new and completely customizable species.

Starfighters and other starships will be featured in the expansion that can be used for both space exploration and combat, allowing players to join up with allies and fly familiar X-wings and TIE fighters into battle against faction-aligned opponents and AI-controlled ships. Transport ships similar to the well-known Millennium Falcon will also be added into the game, allowing players to venture through space with friends aboard.

Since November 9, 2005, all veteran players get it for free. This expansion is now considered as part of the core game.