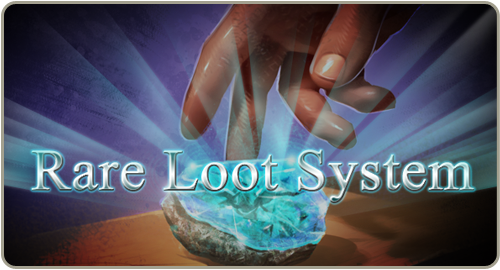 The Rare Loot System is a new feature in Star Wars Galaxies introduced with Hotfix 17.10 that gives adventurers a chance to obtain a bonus reward for defeating encounters. These rewards can range from items that are no longer available through normal gameplay to items that might be extremely rare to completely new items.

WORK IN PROGRESS, DON'T CONSIDER THIS A COMPLETE LIST, AND ADD YOUR FINDINGS
There are three categories of rare loot: Rare, Exceptional, and Legendary (or Space for some). When an adventurer kills a mob and qualifies for rare loot, the encounter will have a chance to drop a rare loot chest. Adventures will need to loot the chest and open it in their inventory to discover what rare loot they have won. The items acquired from the Rare Loot System will be marked with a Rare Loot tag within the examine window.

Restrictions are in place to prevent adventurers from farming mobs or spam killing trash mobs with area abilities.

Adventurers need to fight challenging mobs within 6 levels of their CL to earn a chance to find rare loot. There have been unconfirmed reports of lesser chests dropping from 'elites' that are far lower than 6 levels below players, but this has not been confirmed by the devs as of yet.

The system tracks the time between your last kill and the next kill. If you remain in the same spot (less than 5m distance) for 15+ mins without moving at all, then you'll eventually start triggering the anti-afk code which means no rare loot possible during that period.

Using macros (for combat, looting or otherwise) as part of your gameplay will not affect the RLS system and your chance to get a Rare Loot chest. Using the Autoloot option will also not affect your chances of looting Rare Loot chest, although it will make it more difficult to determine when you have looted a chest as the "beam of light" particle effect will only show when the loot remains on the corpse; the Autoloot option or a looting macro will mean that the chest will be instantly transported into your inventory and the "beam of light" will not show.

N.B. On my toon on Europe-Farstar, Gaellon Hex, a few days ago, I looted a Rare Loot Chest. I had autoloot active, like I always do, and I got the beam of light. The blue-ish light AND sound effect are triggered whenever you qualify for it, so it doens't matter whether you have autoloot active or not.

Using AOE's are fine as well as long as you're considered ATK.

Not included in RLS[edit | edit source]

Collection items can't be found in a rare chest.

Adventurers can also complete new collections and earn a new badge and the title "Fortune Hunter" through this system.

Retrieved from "https://swg.fandom.com/wiki/Rare_Loot_System?oldid=149037"
Community content is available under CC-BY-SA unless otherwise noted.