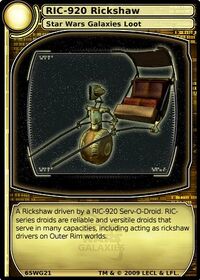 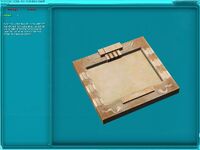 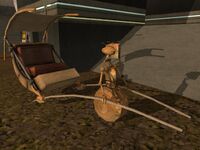 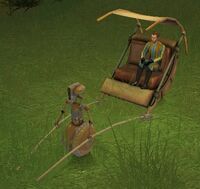 Description: A Rickshaw driven by a RIC-920 Serv-O-Droid. RIC-series droids are reliable and versitile droids that serve in many capacities, including acting as rickshaw drivers on Outer Rim worlds.

When this TCG loot card is redeemed you receive the deed to a RIC-920 Rickshaw which, when called, then becomes accessible from your datapad.

Retrieved from "https://swg.fandom.com/wiki/RIC-920_Rickshaw?oldid=138211"
Community content is available under CC-BY-SA unless otherwise noted.