Player rewards are items or skills that are given to in-game characters for things that players do in real life. These things can include keeping an active account for a certain period of time, attending a FanFest/Convention, having an active character during a Publish/Chapter, or even gifts given for which SWG package they buy.

Players can gain items or abilities for their characters just by buying SWG and it's expansions.

Some rewards really do not have a specific category, or may be a one-time reward for an event.

Awarded for players who were active subscribers during a specific month or those who re-subscribed during that time.

For each succesfully packed-up House or Structure, a player can get one of these rewards.

For inviting friends to use a Buddy trial and convert it into a paid subscription, you can receive a buddy token from your friend through the trade window in game.

This program was held in 2008 and 2009 with a different set of rewards each time.

Held around December in real life since 2003, Life Day is a Star Wars Wookiee holiday. During this time, SOE gives out gifts to players for their characters.

Since 2007, a player went to a Life Day Tree at either Kachirho,Coronet or in front Theed cantina. He would be able to examine the Wroshyr tree and find a gift box for him and another for a friend. The player's gift always contained the same gifts while the other one that would be given to your friend is some random other gift.

Making their first appearence during the CU, and reintroduced for the NGE, SOE has started giving out rewards to players for their characters for every Publish/Chapter. Most of these rewards are usable for all characters, but some require a certain CL or Career/Profession to obtain or use.

The following rewards were given only to characters that had unlocked the novice box in Force Defense, Force Enhancement, Force Healing, Force Powers, or Lightsaber skill before the NGE update.

Chapter 6: "Masters of the Wild" RewardsEdit

Chapter 7: "A Collection of Heroes" RewardsEdit

To commemorate the anniversary of SWG, SOE gives players items or abilities that thier characters can use. 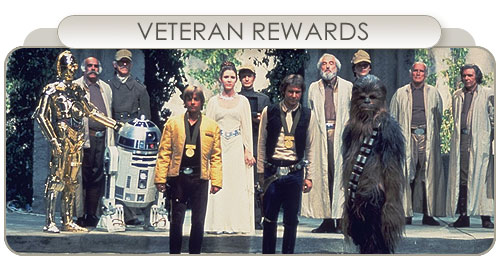 Veteran rewards are items given to players that keep an active acount for certain period of time. Players may choose one reward from the milestones depending on how long their account has been active. So for example, if your account was 3 months old you could choose either the Protocol Droid or the R2 Droid, the harvester deed or the data terminals.

Some Items are limited to one time only per account these are noted with an asterisk (*) beside the item. For example once you choose a Self powered harvester you can not choose another at a later month. You could choose a crate of any existing resource, but once you took that, you would not be able to take it again with a future choice. The rest of the items can be taken multiple times if desired.

There are two commands associated with the rewards:

You will receive a system message that will tell you how many days you have accumulated.

You will receive a message of whether you are able to claim a reward at this time and, if so, the claim dialog window.

Retrieved from "https://swg.fandom.com/wiki/Player_reward?oldid=146264"
Community content is available under CC-BY-SA unless otherwise noted.