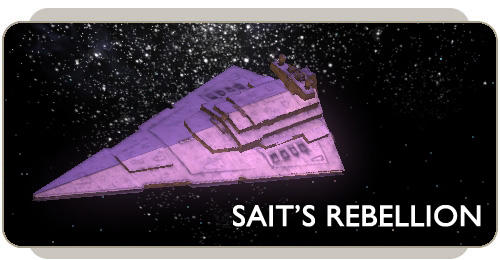 An Imperial captain has gone rogue and taken his Star Destroyer with him. A group of adventurers who want to take back the ship can recruit a pilot to smuggle them aboard. Your journey to the Star Destroyer begins in the Aurilia Adventurer's guildhall.

The rest of the DPS professions are interchangeable on the Imperial Star Destroyer. Of course experienced groups can go with just about any combination, but this will make things easier for inexperienced ones.

How to get in?

Converse with this target (Important note: conversing with the Blackguard itself even while targeting the subcomponent "Hangar" will get you nowhere). And request landing clearance. You need to do this twice: once for your group and a second time for yourself.

Using a POB gives a useful buff to the group:

IF the pilot is a Smuggler, the group gets an enhanced buff:

Hint: using IFF to get rid off the tier 9 spawns is extremely useful. Use it once you are inside the hangar to gain time to find your bearings and converse with the Hangar Bay crew. Do not waste it before, because it has a long cooldown and wears off soon.

There are 7 phases in this instance and this is how I work with my group:

The way to complete this phase is definitely hard and there is a small possibility of the group getting killed from the start but don't worry to much just make sure everyone understands this phase and you will get through Krix. You'll have to tell your group how to proceed, start killing the stormtroopers either left to right or right to left. For this one you'll need a very good power of fire and coordination with the group.

Once you asked him to remove the walls this will spawn dark troopers, start killing them but keep your group together, they use officer melee specials that root and snare, they'll also use BH ranged specials which reduce healing efficiency by 50% so make sure your medics aren't tanking. You'll have to kill them as quick as you can, as the respawn rate is very fast. If you're camping where the officer was, do not let any of the dark troopers escape or they'll come back with more dark troopers that spawned in the hangar and you'll have to fight more troopers than you need too. After a moment a stormtrooper squadleader will spawn, if you see him tell everyone to kill him! This will stop the respawning and open the gate. There are "spawns" of the dark troopers where 2 or 3 new dark troopers spawn. The squadleader normally spawns with the fourth spawn.

(Note: If you go to the right way you'll find an office with a statue for the Four Sages of Dwartii Collection. It is near the spot where you clone in the star destroyer.)

Once you have killed the Stormtrooper squadleader the gate will open and you can go to the next phase there is a stormtrooper walking around in the room, kill him to start the dark trooper spawns.

With the stormtrooper killed, dark troopers will be spawning in the room, there is nothing special to do in this phase just stay grouped and kill them as quick as you can. They'll stop spawning once you have killed 3 spawns of 3 dark troopers. It will end this phase, you can head to your right or if you didn't collect the statue take the elevator on your left and you'll see a statue on the left side of the room.

Head to your right and continue until you find the officer you saw in phase 2 again.

Once you have talked to the officer and asked him to remove the walls again, he'll open a path on your left. In this path there are Stormtrooper grenadiers (but they aren't as dangerous as 1rst phase troopers). Ask a member of your group to pull them in the big room, once they are in the room kill them. Repeat this until you arrive to Prat.

Prat (740k health) is with two IT-O Interrogator droids (128k health) that apply diseases to your group. If you don't have at least 2 medics, ask a jedi to pull the droids one by one. If you have two medics see if one of them have Stasis Field and apply it to Prat then everyone in the group target the droids one at a time and finish them off then after the droids are destroyed kill Prat. Now that the way is clear you can talk to the head technician and ask him to repair the elevator.

This phase will be difficult; you'll have to fight black sun boarders with 500k of life and heavy specials. Head to the elevator in the big room. Use it and stay where you arrived.

You than can move to the next room where you'll meet 3 engineers, kill them and wait in the room. Ask again the Jedi to pull the blacksun boarder to your room and kill them.

There is an engineer walking around in the next room, once you kill him it'll start spawning 3 blacksun boarders with some time delay between them, there are 2 ways to complete this. Either you stay in the room with the consoles and ask your jedi to pull the blacksun boarders to you, or you go in the next big room (if you have a good group) and kill the blacksun boarders there. Alternatively to save a few minutes here avoid the engineer and warn everyone not to attack him and turn off all macros. Keep to the right and hug the wall as you walk around half of the circle room to the door that leads you to the next part. When you return to the elevator you'll go through that room again so do the same thing, if when returning someone gets thea ggro from him don't do anything just run towards the elevator and he will go away.

If you aren't in the big room with catwalks yet go in and ask again for the jedi to pull the boarder and kill them. Next blacksun is an engineer, move to the last room and start killing either the bottom or top boarders.

Once everything is done the head technician will come to fix the gate lock, head back to the elevator.

The head technician will open the next gate, make sure all your group members are passed the gate in the room to start fighting the next boss.

For this part, Commander Kenkirk (1,078k health) uses heavy ordnance and an orbital strike, make sure your medics are at a safe distance constantly healing as well as keeping your range at a good distance from Kenkirk. Let the jedi hold Kenkirk at the end of the hallway.

Sait (1,265k health) doesn't put up much of a fight, so you don't have to worry but stay sharp, Sait will be using officer abilites.

Congratulations! You completed Imperial Star Destroyer Heroic Instance and got a blacksun token of heroism!

Retrieved from "https://swg.fandom.com/wiki/Lost_Star_Destroyer?oldid=148975"
Community content is available under CC-BY-SA unless otherwise noted.