In this part of Game Update 15 the battle for supremacy heads to Keren, the most important trading hub of the planet Naboo. Every three hours, starting at 00:00 GMT, invading troops take up their positions and try to usurp the city's current occupiers. See Invasion Times for details of the new start times.

In this Phase the defenders build up the city's defenses whilst the aggressors put together the forces that will join in with the siege. The Defending General can be found in the centre of Keren at /way 1786 2511. Nearby the Resource Terminal and the Field Officer can be found. The Resource Terminal gives resources to Traders and construction missions whilst the Field Commander gives combat missions.

[note: only north west and south camp have seige vehicles]

Each camp consists of a Captain, a Resource Terminal, a Cloning Facility, a Junk Dealer and a factional recruiter. In the offensive camps it is the Captain that gives the combat missions.

All players can then use Tools to add resources to the Pylons that can be found scattered throughout the city or on the invasion route. Traders are the most efficient Pylon crafters, although other professions can take part in this stage if a Trader gives them the Tools. For every Tool that is used in building up a Pylon, a trader accrues one fatigue point whilst other professions suffer five. The number of resources added to the Pylon is the same for all professions but is dependent upon the stats that the Tool have. Pylons take on different levels which are dependent on the amount of resources used in their construction.[note: even low lvl crafters are better then combat class's when filling pylons]

The Pylons remain as Pylons throughout the Construction Phase. Each of the above five Pylon types are represented by an icon that can be seen floating above the Pylon. They are converted to the correct item once the next Phase begins.

Each Pylon also comes with a specialisation that determines what part it will play in the coming battle. Pylons that remain at level 0 will not transform into a combat resource once the Construction Phase is over.

Constructing these Pylons cause the builder to suffer from fatigue. Fatigue is a stackable debuff that increases the time required to add resources to a Pylon. A second is added to this timer for each ten debuffs that a player receives. The debuff is capped at a difficult to obtain 1000, meaning that a maximum of 100 seconds is added to the timer (bringing it to a total of 1 minute and 50 seconds). Entertainers can remove this fatigue and by doing so speed up the construction rates of their side.(note: loging out and waiting till your character dispears after LD period will remove all fatiuge)

Upon completing Galactic Civil War Construction Quests, the player will be rewarded GCW points and tokens. Combatants receive 250 GCW points and 5 GCW tokens, while Special Forces are given 500 GCW points and 10 GCW tokens. These missions revolve around using 10 tools on a Pylon, such as the Patrol, Barricade, Tower, Turret, and Vehicle Points.

[note: lvl 1s and 2s wont hold up to a full scale invasion and should not be used unless you have no other choice]

These Pylons become Barricades and shield nearby players and NPCs during the next Phase. They do not have levels, but their hit points are increased by 5000 for each resource used. [note: any barricade pylon below 50% full wont last long in a drawn out battle]

These Pylons become Turrets that are controlled by an AI and fire on enemy units. The different levels of the Pylon gives the turret increased damage per shot, each resource used also increases the hit points by 5000. [note: 100% full turret pylons are the only things that will be able to keep gold vehicles from overuning u try to fill them all where possiable]

At the end of the Construction Phase, players who took part are awarded 100 GCW and 10 Tokens.(note: the tower placed near the general in keren as well as its supporting defences take the full brunt of the enemys vehicles build that up as much as possiable)

Note: Keren is a city that is very closed in near the general, this city is ideal for class's who usually use melee attacks such as Jedi.

The invading forces attack along a number of different paths to make their way into the center of the city. The defending forces stay rooted to their spawn location to fend off any enemies. The map shows the invasion routes: (note: attacking forces can be blocked from reaching the generals defences at 2 key locations. the guild hall near the spaceport bridge has in its main defence area 1 turret, 4 barricades and 6 patrols. the other area is the one near south bridge and it has in its main defence area 1 tower [on wrong side of defence], 6 patrols, 4 barricades and 1 turret) The objective for Attacking forces is to defeat the entrenched General. The Defending faction have to keep the General alive for the full 30 minutes in order to be named the victors. The General is a CL 110 Boss with 1 million health, he possesses powerful ranged and AOE attacks. The NPCs make their way towards the General in order to make their attacks, but players need to take care: attacking the General flags the player as Special Forces so the defenders can add their power to the defense.(note: have seen some comet [mortor?] like thing fall from the sky and do damage to attacking forces, bears resemblence to artillery strike immediute effect storyteller token)

Both offensive and defensive factions make use of these Patrol Spawn Points. Defensive points spawn a single NPC of varying skill that will remain at that location and attack enemy units until killed. Offensive points spawn NPCs at time intervals that will follow the set paths towards the defensive positions and attack the units that it finds along its path. Spies are given missions to destroy these Patrol points and halt the spawn of NPCs, Entertainers can inspire the patrol points to buff the NPCs and Traders can repair the Patrol points if they are damaged.(note: these are the workhorses of your defence and attack be sure to build as many of these as possiable)

These are only available to the invading faction and spawn vehicles at time intervals that make their way into the city, attacking defensive positions as they go. these are much more reselient to damage then normal units of their lvl. (note: almost all vehicles will enter the generals area from the tower side build up as much vehicles as possiable to exploit this)

Only the defending faction can benefit from barricades that provide defensive buffs whilst they remain standing. Any attacking combat profession can be given missions to destroy these for GCW and token gain, whilst defending Traders can repair the barricades if they are damaged.(note: barricades will not provide bonus's to droids under your command nor will it be provided to turrets. also the protected status that the barricade is on a long enough timer that it allows to to run out from cover and attack opposeing forces for a few seconds, this is useful when confronted with SF enemys jumping round buildings, fireing and then runing back behind cover) 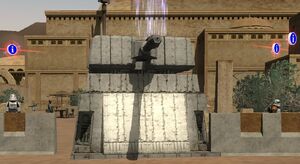 Again, these are only available to the defending faction. These powerful guns will only target attacking players and vehicles. Any attacking combat profession can be given missions to destroy these for GCW and token gain, whilst defending Traders can repair the turrets if they are damaged.(note: turrets are extremely powerful and can overwhelm even the toughest player if not handled properly) 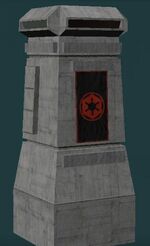 The defending faction is once again the only faction that can benefit from these towers. Towers provide increased intelligence to the AI of nearby NPCs. There is no specific mission given to destroy these, but enemy vehicles will make it their priority to level these structures. [note: towers do not provide bonus's to turrets or characters]
EDIT: Towers are where the defending faction get the quest to kill offensive vehicles, and the vehicle kill quota is entirel dependant upon having the tower quest.

Each Profession has missions that provide GCW points and tokens and run alongside the main attack/defense mission. Like with the construction missions, completing these missions gives your faction small advantages in the battle and can turn the tide of the invasion. To take part in these missions players must be Combatant or Special Forces.

Players who have taken part in the winning faction are awarded 1000 GCW and 40 Tokens and players in the losing faction are given 100 GCW and 10 Tokens. The number of tokens and GCW points rewarded for the winning and losing faction are the same for Combatants and Special Forces. A Comm message from an important factional character will let the players know how well they have done. The city's invasion then goes into cooldown for two hours. During this time the Invasion NPCs despawn and normality resumes. Remember that the Defenders for the Invasion are not determined by the outcome of the previous Invasion, rather the GCW score for the region at the start of the Invasion. This means that players can use the two hour window to gain additional GCW points in the region which might change the factional balance in the city by the time the next Invasion rolls around.[note: it is advisable to start going combatent 5–6 minutes before the seige ends to avoid geting overun by enemy players seeking revenge for their defeat]

Retrieved from "https://swg.fandom.com/wiki/Keren_GCW_Invasion?oldid=147689"
Community content is available under CC-BY-SA unless otherwise noted.