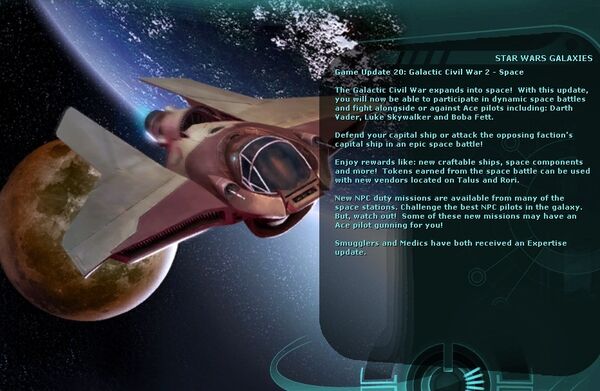 The Galactic Civil War expands into space! With this update, you will now be able to participate in dynamic space battles and fight alongside or against Ace pilots including: Darth Vader, Luke Skywalker and Boba Fett.

Enjoy rewards like: new craftable ships, space components, and more! Tokens earned from the space battle can be used with new vendors located on Talus and Rori.

New NPC duty missions are available from many of the space stations. Challenge the best NPC pilots in the galaxy. But, watch out! Some of these new missions may have an Ace pilot gunning for you!

Smugglers and Medics have both received an Expertise update.

Retrieved from "https://swg.fandom.com/wiki/Game_Update_20?oldid=135745"
Community content is available under CC-BY-SA unless otherwise noted.