Edit
watch 04:03
Wiki Targeted (Games)
Do you like this video?
Play Sound

Anyone can use a pistol, rifle, or even a carbine, but when you need a base blown up, or a large brigade of troops taken out, you call in a specialist. You call in a Commando.

A true combat specialist, the Commando uses heavy weaponry and demolitions to break through resistance. Whether you prefer to get in close or fight at range, Commandos wreak havoc with their powerful weapons.

Basic Trainee
(After signing with the recruiter they gave us a day to say good bye to loved ones, then shipped us out to Carida. Daybreak on Carida comes with the clanging of sirens and Drill Sergeants barking commands in our ears. From there we trained in the hellish heat of the deserts to the biting cold of the arctic, 18 hours a day. Months passed and in the end discipline was instilled and a singular purpose to do what was ordered remained. Kill or be killed, because hesitation means death.)

Soldier
(It didn't take long before they gave us our first assignment. We were stationed on a planet in the core called Fresia. This was a nice post for a soldier fresh from the academy. A really easy time in comparison to being on Carida. Many of our comrades had recently been taken off world to Kuat to help stop a rebel attack. Little did we know then that our post was the real prize and the four spacecraft we were guarding. The realization didn't hit until sirens started blaring and a corporal yelled "INCOMING...")

Veteran (After Fresia, not many of us survived. The Rebels during the attack made off with the starfighters that they took out half of the base for. Since then I have been going from skirmish to skirmish and gaining ranks in the army. Now I look at the fresh meat coming from the Academy, boys all of them. This coming battle will make soldiers out of them or get them killed in the process. Today's mission is special, Vader is part of the attack. **BOOM** We flood onboard the Rebel Blockade Runner...)

Commando
(There is something about a planet blowing up that really makes you take a hard look at your experience. Going back to that time before the Academy and all of the events leading up until now. Only a handful of us army grunts left, complete masters of weapons, armor, and combat. Now we have to decide, stay with the Empire, join the Rebels, or gun for hire. Whichever side we take, whoever comes against us in combat knows they have a hard fight ahead...)

Purchasable Jewelry sets from Heroics specific to the Commando profession (except for the Heroism set which is universally obtainable for all professions).

Listing of all abilities the Commando gains just from leveling up to 90.

Listing of all abilities/stats/procs obtainable via the commando's expertise tree. 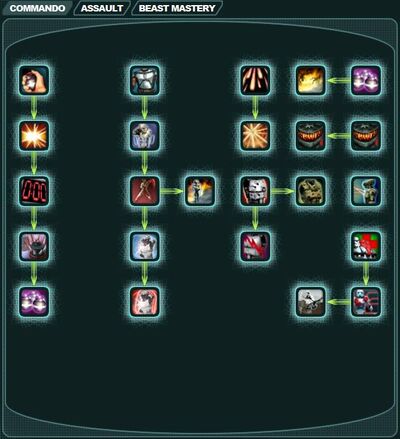 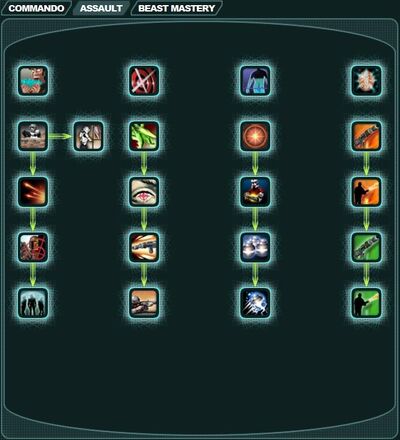