Understanding the core systems underlying combat in Star Wars Galaxies is important to every player. Hardcore PVP'ers and casual hunters can equally benefit from knowing the basic equations and ideas behind attack speed, accuracy, template stacking, states, postures, and other combat-related topics.

Like any role-playing game, Galaxies uses a set of mathematical equations that govern your interaction with the game world. These equations determine everything from item assembly success to attack hit percentage. Understanding these equations is vital to analyzing and fully understanding combat in SWG.

Attack Speed is based (and listed) on your weapon of choice. There are 5 types of weapons but only 4 different combat speeds.

Specials can be executed with a 200ms (milisecond) seperation. Due to lag, this time is often stretched by more than 5%. When building macros, particularly macros that find their way into PVP, its adviced to increase the pauses between each special to more than 0.2 seconds to compensate for lag.

Multiplied by their attack speed, those maximum values grant a maximum potential DPS at 1424-1425 for the pistols, rifles and carbines and slightly higher for the melee and heavy weapons. The reality is that there are caps in place to balance out the weapons at fixed DPS values so that one type of weapon does not have an apparent advantage over the others. Weapon DPS caps ranges from 1150-1403.

Some expertise choices are designed to increase the damage done by your default attacks. The following proc effects will increase your white damage by triggering a second attack, a new combat roll based on the minimum-maximum damage interval of your weapon. The chances are applied per second, and will have to be converted to the attack speed of the weapon.

For every stat in SWG there is a table with 1000 entries. Based on the additions to the table made by the player, race selection during character creation, profession choice and expertise selections those tables are filled out with a high or low number. Some professions are better at killing than others (DPS), while certain expertise choices makes for excellent defensive builds with little offensive power (Tanking).

When adding entries to the combat tables, your values are added and converted to a percentage value and displayed on your character sheet in the SkillMods pane. 1000 entries equals 100%, while 297 would equal 29.70%.

Recieving a buff means adding entries to a combat table, while recieving a debuff means that a value is subtracted from a combat table - leaving you weaker than before in some way. Depending on your character build, some debuffs can be more harmfull than others; For example a damage reduction debuff will affect a DPS profession more than a medic, while a healing potency debuff will have no effect on the DPS from a Spy, Smuggler or Commando but can get a group killed as the medics ability to heal his group members can be seriously reduced.

Only one profession has the ability to increase the number of entries in the combat tables from the default 1000, thus thinning out the effeciency of certain combat tables. Regular debuffs will simply remove the entries that the player has previously inserted via buffs.

Smugglers with Impossible Odds expertise can apply the debuff to thier opponents, which in turn will experience a decrease in effeciency of their defensive values as their combat table entries have been reduced in potency.

While not completely accurate, this chart shows a rough outline of how combat rolls are made as they all follow a predetermined order. 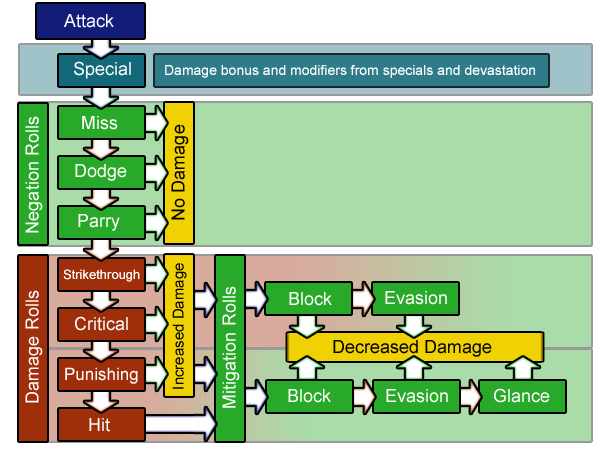 As seen in the Combat Order above there are different hit types:

Even with no Novice Professions, a player has several innate abilities:

When in combat, you are likely to be afflicted with a variety of "state attacks." These attacks change the abilities and modifiers of your character to either increase or decrease your effectiveness in combat. States that increase your potency are called "buff" states; "debuff" states generally hurt your character.

Two primary damage types exist in SWG. Each player weapon will deal damage in either of these types:

Kinetic damage is arguably more effective, as PSGs will only protect against ranged Energy attacks.

Additionally, many weapons have a bonus Elemental Damage associated with their attacks. Elemental types include:

The four basic postures in SWG affect player regeneration, aiming, defense, concealment, and movement speed. The only posture you cannot be in during combat is sitting.

While in combat there are two modifiers granted to the player:

These modifiers take into consideration if the player is standing, kneeling, or prone and still or moving.

Line of sight is the system used to determine if characters can "see" their targets. If a target can be seen, then they can be attacked. If something is blocking the target, then they will not be attacked, and the player will receive a Flytext message saying "Can't see target."

Doors and furniture that can be walked through do not break line of sight, and thus provide no cover. Sometimes you are able to fire through walls if targets move quickly; this is often just an effect of lag: at the time of the calculation, the target was within the line of sight, but by the time you see the action the target is behind a wall. Note that most fences are collidable, and thus prevent attacking targets that are on the other side.

Retrieved from "https://swg.fandom.com/wiki/Combat?oldid=136534"
Community content is available under CC-BY-SA unless otherwise noted.