Edit
watch 02:23
Wiki Targeted (Games)
Do you like this video?
Play Sound

Chronicles is a new type of gameplay within the SWG universe that allows any player to become a Chronicler and to create their own quests and share them with other players within their server. Added to the game with Game Update 13, Chronicles uses a new Profession system, new items, and new skills to enhance gameplay and bring player ingenuity to the forefront of the MMO genre. Any player can become a Chronicle Master as the profession acts independently of the player's main profession (in the same way that Pilot and Politician does) and does not require any Expertise points.

As an Update 13 gift, you receive a Chronicles Start Kit.

These relics can be looted from almost any NPC in Star Wars Galaxies and are the basic building blocks of the Chronicler Profession. Each Relic represents a task that a player will have to undergo in order to complete a quest. Relics quality can range from 1 to 4 and relates to how challenging or exciting the task is. If a Chronicler is capable of understanding the Relic (if their Relic Quality Skill is high enough) they can add these Relics to their Quest Builder and use them in the creation of quests. A list of drop locations can be found here.

NPCs can also drop Chronicle Relic Fragments, and looted Relics can be deconstructed into these Fragments. These fragments can be rebuilt by a Chronicler into a new random Relic at a cost of ten Relic Fragments per two new Relics. The skill of the Chronicler determines the quality of the new relic.

With the inclusion of the April 2010 Bug Bash Update, developers added the /chroniclesloottoggle command which will stop the NPC from generating Chronicles related loot upon its death. If any member of a group has the toggle set to ON, then loot will still drop, but if every group member has the toggle set to OFF then the loot will not drop. By default the Chronicles Loot Toggle is set to ON. 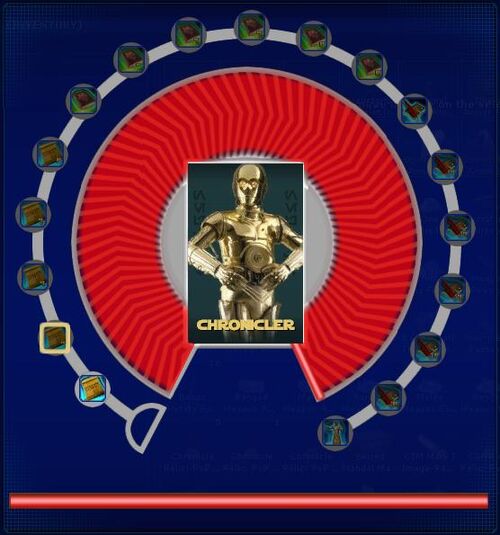 Creating quests within the Quest Builder grants Chronicler XP. As a player gets more and more XP they move up through the levels of the Chronicler Profession which allows them to create longer quests using more complex tasks. The different levels and bonuses within the Chronicler Career Progression are as follows:

The four skill modifiers that this Career Progression gives are listed below:

Once a Chronicler has created a quest, it becomes a Holocron which can be traded, sold or shared with other players. Players can then complete these quests and are rewarded with Silver or Gold Chronicle Tokens for doing so. These Tokens can be spent at the Chronicles Vendor in Theed or Coronet for various exclusive items.

Community content is available under CC-BY-SA unless otherwise noted.